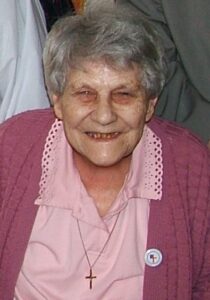 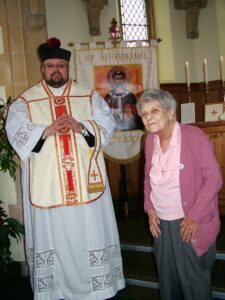 The Bishop has announced the news of the death of Mrs Diana Gillian Parry (known as Gillian or Gill) at her home, Highfield Nursing Home, Birchington-on-Sea, Kent. She was 97 and a founding member of our Canterbury Church.

Mrs Parry had been a churchwoman all her life and was a long term committed member of the Anglican Catholic Church. She worshipped originally in our Dartford Mission and Rochester Parish and then when our Canterbury Church opened she attended there regularly because it was nearer to her home. Gillian also for some time facilitated the ACC Mission of St Mildred which met in her home for Mass monthly.

Gillian had for many years worked as a Hospital Social Worker in London and one recounted how during the Second World War, during the Blitz, had been called upon to help lead patients from the blazing hospital where she then worked.

A life times love of animals manifested itself in her skill as a dog trainer and pet owner and her support of numerous animal charities. A life member of the Society for the Protection of Unborn Children and a long term member of the Girl Guides.

Gillian Parry married late in life. her husband Douglas, predeceased her in 2006. They had no children.

Commenting upon the news of her entry into eternal rest, the Archdeacon, the Venerable Raymond Thompson, said; “She was such a loyal servant of the Lord, with a heart of gold, but it didn’t pay to annoy her! Her passing was expected for such a long time but it seemed she was going to live for ever!”

The Bishop, also commenting, recounted how “I am now even more convinced that the last time I visited her, a few weeks ago, the momentary return and recognition, during my anointing her with Holy Oil, when she took hold of my hand and kissed my episcopal Ring, was a farewell. Without a word spoken. Praise God that he granted us both that. I am glad that she has been called home and is now at peace in the Lord whom she has faithfully served all her life.”

He also recounted how: “Gillian’s bluntness could knock the wind out of ones sails. But she also had a very dry humour and I was never completely sure when she was joking until she started laughing and then her whole face lit up. Once when she was unable to come to the Communion rail in Church and asked to be communicated in her seat, I forgot … BUT only once and only briefly. She took her walking stick to the Church radiator next to her and bashed, if you’ll excuse the expression, ‘the hell out of it’, to get my attention!
Among her belongings, which I have been the custodian of, for a number of years, is a box full of the dog tags from all the numerous doggie friends she has had over her long life. I haven’t counted them yet – but there are a lot of them.”

+ Rest eternal grant unto her, O Lord, and let light perpetual shine upon her. May she rest in peace. Amen.

Mrs Parry’s Funeral will be held on Wednesday 18th November 2015.

Her ashes will be interred at a later date in the grounds of St Thomas Church, Minnis Bay, where her late husband Douglas was also interred as per her wishes and in due course a small rose tree and a plaque will be installed.

Donations, in lieu of flowers, in her memory to the Dogs Trust Charity please.