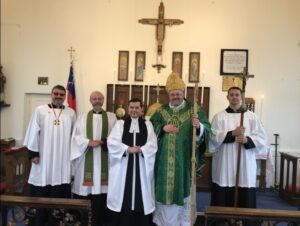 On Trinity XIII (Sunday 26th August 2018) the Bishop received, before the celebration of Holy Mass, The Reverend Andrew Paul Scurr, into the full communion of the Anglican Catholic Church.

Fr Scurr has become well known to the Bishop and some of our clergy and laity through the cordial relations between his former jurisdiction, the Old Roman Catholic Church, under Archbishop Jerome Lloyd, and our Diocese over some years.

Fr Andrew became a Roman Catholic whilst studying Mathematics at Christ Church College, Oxford (MA) and received Confirmation under the auspices of the University Chaplaincy. Through conversations with friends and Chaplains, he began to discern a vocation to the priesthood. After graduation, Father began discerning his vocation studying initially at the Venerable English College, Rome and later as a Novice with the London Congregation of the Oratory at Brompton. However he did not continue at this time because of the upset caused by the Episcopal Consecrations performed by Msgr Lefebvre.
Father Scurr therefore taught mathematics at Senior school level for about ten years before studying for a Master of Science degree in Financial Mathematics at the University of Edinburgh. He has since worked in the Financial Services sector in the City as a Quantitative Risk Analyst, presently working for the Bank of England.

Fr Scurr made contact with the Provost of the Brighton Oratory in October 2009 and began discerning his vocation to the Sacred Ministry within the Old Roman Catholic Church. Fr Andrew was ordained a Deacon in February 2013 and a Priest on the Feast of St Matthew (21st September) of the same year. He has since acted as curate to the Brighton Oratory, and run a small mission in Buxted, East Sussex. 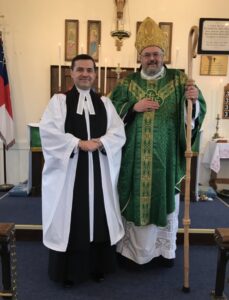 In 2016 Fr Andrew graduated with an Ecclesiastical Bachelor of Divinity degree conferred through Maryvale Higher Institute of Religious Sciences by La Faculté Nôtre-Dame Paris, having studied for this degree part-time by distance learning.

Fr Scurr, who lives in East Sussex, was received by, and made canonical oaths to, Bishop Mead who was assisted by the Archdeacon, The Venerable Raymond Thompson, and is to be licensed as an Assistant Curate of the Pro-Cathedral Parish in due course. It is also hoped that he will be able to provide sacramental cover for our Church in Rochester. Longer term the establishment of an ACC Mission in East Sussex may be possible.